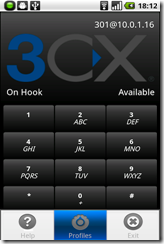 3CX has created the Android SIP phone in recognition of the increasing importance of the smartphone in conjunction with a modern VoIP PBX.

It can be accessed on many smartphones including Motorola, Samsung and Sony Ericsson as well as Google HTC (including HTC Desire and HTC Elite).

The 3CXPhone for Android SIP Phone is available via the Android market place. You just open up the market place and search for 3CXPhone to install it. The 3CX VoIP Phone for Android is free of charge. Not only does it work with the 3CX Phone System, but also numerous other VoIP services.
Posted by Technology News at 10:31 PM

Impressive and powerful suggestion by the author of this blog are really helpful to me. Switch to NBN

Share great information about your blog , Blog really helpful for us . We read your blog , share most useful information in blog . Thanks for share your blog here . Telstra Dealers Brisbane