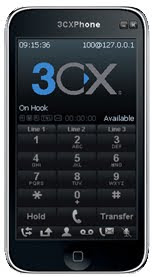 London 12 January, 2010 - 3CX today announced a new version of its popular free VoIP softphone for Windows, 3CXPhone 4.0. 3CXPhone 4.0 sports an all new interface that should be familiar to millions of users the world over. Similar in look and feel to popular smart-phones, users will be able to make and receive calls without requiring any training.

“3CXPhone is a great VoIP phone for businesses. It’s easy to deploy and manage for network administrators. Users will love it for its cool look and intuitive interface.” Said Nick Galea, 3CX CEO.

3CXPhone is provided completely free of charge to individuals and organizations including commercial entities. All features (including call transfer) are enabled. This makes it easy for companies to deploy it on any Windows desktop without having to worry about cost or licensing hassles.

Remote extensions are easy with the 3CX Tunnel

3CXPhone can easily be configured as a remote extension, allowing users away from the office to easily connect to the corporate phone system. The unique tunnel feature proxies all SIP & RTP traffic over a single port and makes firewall and NAT configuration a breeze. It is also possible to configure it as a remote extension using ‘direct SIP’.

“The soft-phone is becoming a serious ‘IP phone option’ for businesses. They are easy to manage, save on electricity and administration. 3CXPhone is free of charge and is also very easy to setup as a remote extension, allowing users to connect into the company phone system from wherever they are” said Nick Galea, 3CX CEO.


3CXPhone 4 is available in several languages. Besides English, it is also available in German, Italian, Spanish, Chinese, Portuguese, Romanian, Russian and very soon in French.

To read the full story, click here
Posted by Technology News at 7:13 AM 2 comments: